Empowering all women through education, friendship, and singing.

The History of Harmony, Inc.

Since 1959, the organization has expanded from its Eastern roots to include chapters in the United States and Canada from California to Newfoundland, and from Manitoba to Florida. Contests and conventions are held each year for the purposes of educating members in the performance of the craft, bringing together the membership to see the best perform, informing the membership of the status and direction of the organization, and encouraging an atmosphere of friendship and camaraderie. A steady growth in membership, a gradual geographic expansion, continuous improvement in the quality of performances, and the determination to abide by its democratic principles and maintain its unique “Blend With Friendship”, all bespeak a bright future for Harmony, Inc.

At International Contest and Convention 2019 in Sandusky, Ohio, Harmony celebrated its 60th anniversary. Linda Brehaut (incoming VP of Contests and Conventions) put together this lovely PowerPoint which was on display during the banquet.

The yearbook has been broken into the following sections/pages. Each link is a PDF file and is provided in the same order as the original yearbook.

Front and inside cover, Foreword 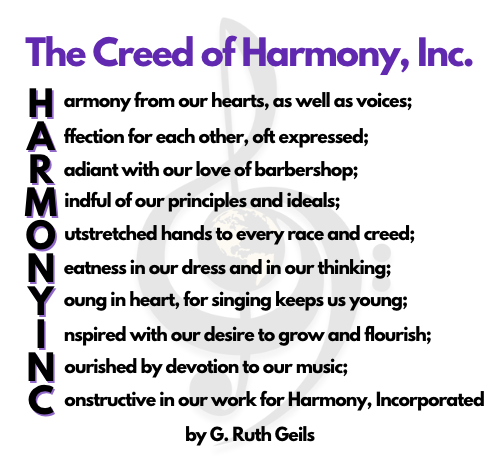 Chapter One: Prelude to Harmony 1957

Chapter Seven: Year of Many Changes 1976

Chapter Nineteen: A Gem of a Ruby Jubilation 1999

About The Author: Jeanne O’Connor

Editors of The Key-Note / International Contest and Judging Program